A Strike Every Time

"Hopefully someday soon we'll believe that, if we are still breathing,
it's never too late to start over."

When I first met my husband, he was in a bowling league. Back in the day, he would bowl Monday night and I would go, without fail, to watch him. I smile when I think about those late nights at the alley, eating food that wasn't good for me, the effort I put in to what I would wear, my hair, and my makeup, and the nervous energy I felt the first few weeks meeting his friends. In my mind, this was a make it or break it situation, and I was going to do everything I could to pass the test. (True story: One week a friend of mine that worked the Lancome counter did my makeup for me and her roommate, a stylist, did my hair. So I could sit in a bowling alley looking pretty.)

Watching him I learned a few things very quickly:
1. You never want to be the only one in a frame to not get a strike.
2. A turkey is not a bad thing.
3. If all the pins fall, it doesn't matter if the last one hit the floor after it wobbled for an eternity or if it was pure luck because the way you threw the ball should not have resulted in a strike.

As a completly incompetent bowler, this last one is the one I like the most. If I get a strike, I am celebrating massively and I really don't care what it looked like. As long as that 'x' goes in the row with my name, I am thrilled. When you are completly incapable of having any type of form, grace, or consistency in doing something, any time you get it right, regardless of how ugly it might have been through the process, it's worth acknowledging. (And all the good bowlers shake their heads in disgust.)

I think this is how God must see us sometimes in our obedience. He might have an idea of how He thinks it should look for us to complete what He's told us to do, but our execution of it might be far from His vision. It doesn't make it count less, it just might have taken us longer or made us more exhausted than it should have. And here's the beauty of it all, the ball isn't reaching the pins until it's done.

But with God, the doing is what's important. The fact that we are acting upon His direction is significant, even if we are doing things the hard way. He also knows that with repeated attempts our form will get better, things will get done sooner, and the glory will go to Him because we will most certainly know it wasn't in our own strength that we did any of it.

But it's so easy to get caught up on making things want to look pretty! I can't even tell you how many pages I've ripped out of journals because I felt a need to start over and make it all look pristine, flawless, perfect. I'm not sure why some of us have such a predisposition to that, and I'm not even sure I know how to stop it. I just know that I'm working on it.

And here's the thing: if God expected perfection, we'd all be in a heap of trouble. And if He was really up there waiting to smite us, none of us would be vertical. Hopefully someday soon we'll believe that, if we are still breathing, it's never too late to start over. Even if that means we start over seven times a day. Because until He calls us home, the work He started in us is still be worked through to completion.

Father, I can't praise You enough for Your patience with us to not only see things through to the end, but to let us fumble our way there. Remind us often that You know our heart is in it, even when the doing isn't as pretty as it could be. You are much more concerned with our obedience than you are with unblemished work. And when we reach the finish line, our loudest boast will be in what You did through our jars of clay. Amen. 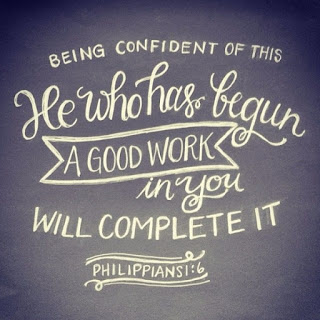