A little over a month ago I read something in Deuteronomy that was about the most humbling passage of Scripture I have ever come across.


You are not going to take possession of their land because of your righteousness
or your inegrity. Instead, the LORD your God will drive out these nations before
you because of their wickedness, in order to fulfill the promise He swore to your
fathers, Abraham, Isaac, and Jacob. Understand that the LORD your God is not
giving you this good land to possess because of your righteousness, for you are
a stiff-necked people. Deuteronomy 9:5-6 CSB

So, in case there was ever any doubt in our minds about why we are given some of the things we are given, that pretty much sums it up. Sometimes it is simply because we are the lesser of two evils.

So this morning I finished 1 Samuel. Having been in the Old Testament since the start of the year because I am reading through the Bible chronologically, when you see the story line develop in such a dramatic fashion, it is really quite intriguing. And when you toss in the Psalms that David wrote while Saul was pursuing him or while he is fighting battles, it makes his words just fly right off the page. (Some day, if I am brave enough, I'll share an interesting paralllel I saw between the Old/New Testament. I was totally geeked out about it. Like over the top geeked out.)

Anyway, after finishing the last four chapters of 1 Samuel, I had to read Psalm 18. And there were two things that really stuck out to me.

Because those humbling Deuteronomy verses have been stuck in the back of my mind, verse 19 made me see God's dramatic love for us in a profoundly new way. Whether or not we deserve it, He rescues us because He delights in us. Even when we make mistakes, even when we make poor choices, even when we flat out know better, His delight in us is not declared null and void. The truth is, He wants more for us than we want for ourselves and He's willing to relocate us to help us see it.

Now that second verse proved a bit more troublesome because of the difficult words in Deuteronomy.  And so I read it a few times and then stared at it. And then I wrote a bullet point down about it and started at that. And the more I looked at it, the more confusing it got. Until I actually saw what it didn't say. It doesn't say the LORD rewarded me because of my righteousness, it says the LORD rewarded me according to my rightouesness.

Since reading the verse in Deuteronomy in March, in a way, I've been beating myself up over it. I mean when you read you really don't get anything you have because you've earned it or deserve it, that's pretty cut and dry. And when you feel like you're getting it because you are the less evil option, that just pretty much seals the deal of every ounce of unworthiness you have ever felt in your life. And okay, that should make grace all the more beautiful and appealing, but when you have a full set of Samsonite that you've been carrying for 40+ years, that's not as easy of a transition as one might think.

However, Psalm 18:20 highlights something else. Progress. Movement in the right direction. Growth.

In order to be rewarded according to our righteousness, there has to be some involved. It might not be total, and it certianly isn't complete, but it's still apparently there, which by default means transformation directed by, and a result of, God's internal work in our hearts and minds.

I don't know why so many of us struggle with perfectionist tendencies. We like Monday starts because they look fresh, new, and mistake free. But by the time 10:30 AM rolls around and we've either lost our cool with a kid or absent mindedly finished the cookies because they didn't get put away, we have already written off the rest of the day if not the rest of the week. Our thinking in so many regards is completely black and white. But if I'm learning anything, it's that progress is gray.  Sometimes it's obvious and sometimes it's not.

What's fascinating is that David shares what I believe was his key to progress. In verses 21 and 22 of Psalm 18 he writes For I have kept the ways of the LORD and have not turned from my God to wickeness. Indeed, I let all His ordinances guide me and have not disregarded His statutes.

Four things. (1) He kept the ways of the Lord ~ which by default means he knew them. (2) He did not turn to wickedness ~ which would have been easy considering he had two opportunities to take out Saul (3) He let God's ordinances guide him ~ again meaning he knew them. And (4) he did not disregard God's statutes ~ even the ones he might have liked to.

Because Friday is the end of the week, this is the day many of us look back and think about all that has happened over the last five days. I would think that's probably because by Tuesday at dinner we are ready for the weekend because something has happened that makes us desperate for the week to be over. But instead of thinking about all the things we could have done differently or better, let's try to find the places we see progress. And before we're tempted to say there was none, that would mean God wasn't active in our lives and we know that's simply not true.

It might not be easy or obvious to find the spot we seem to have a little more room, but my guess is that we've all been rescued this week in one way or another and brought into a more spacious place. Truthfully it might be a space in our thoughts that's opened up to new possibilities or a spot in our hearts that seems capable of more love and compassion. My hope is that if we can see where God stepped in and rescued us (likely from ourselves), we'll also see the ways He has grown us. And if we can see that He has rewarded us according to the righteousness that He sees in us, maybe we can start to see ourselves more through His eyes than our own. 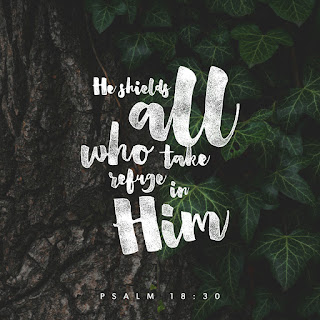