Sometimes I wonder if my voice sounds like a broken record, repeating the same things over and over again to myself. I question if this is an inability to learn, the tendency to easily forget, or if I am trying to remember something I am not truly meant to remember. If in fact I don't forget intentionally, but more or less God gives me the knowledge I need for that day but then the minute I get a bit too big for my britches, I get a subtle, humbling reminder that I really can't do it on my own. Truthfully, the last one is most likely the case.

When I wrote about Begin Again by Leeana Tankersley the other day, I had yet to finish the book. Only having a handful of pages left, I had no qualms about recommending it because it has helped me see so much about myself. What I did not expect was that she would clarify my faulty thought process on my greatest obstacle.

For the longest time I have wanted some things to just be learned and moved past. Tired of repeating the same things over and over again in an effort to 'get better.' I mean how many times does one have to read 'do not fear' before one stops fearing? Except the book challenged me to not think of it so much as a failure to perform as much as an opportunity to 'begin again' seeing what new thing popped up that recreated the problem or what old thing somehow resurrected itself in my head.

And then I read this:

Each of the examples she uses are the things we tend to do most often. They just become a part of the DNA that makes up our daily or weekly life. Over time we might get more effecienct at them or find better tools that make them easier or less tedious. We might even see a lifehack that simplifies the ability to keep up with these things at a level we didn't think was possible. But regardless of how good we get at them, they still don't end. Especially the laundry, dishes, and vacuuming.

And if this is true of general life stuff, how much more true is it on the things of God? The things we know He is showing us but somehow we can't seem to make them stick permanently? And why? Because the more we desire to reflect His image, the more the refining fire has to burn away. It can't be one and done because that would mean we became like God, not just an image that reflects Him.

Because the reading plan I am following this year is chronological, the one thing I have seen more than anything else in the Old Testament is this: return to the LORD. As in RE-turn to the LORD. As in, we turn from Him because we think we know or can do it on our own and now we need to RE-turn our bodies, hearts, and minds back to Him. And do you know why I think He made that phrase so prevelant? Because He knew our tendency would be to hide and avoid instead of admitting we fell short, again.

1 Samuel 12:20 reads, Samuel replied, "Don't be afraid. Even though you have committed all this evil, don't turn away from following the LORD. Instead, worship the LORD with all your heart."

From the beginning, Adam and Eve set the example to hide. And we do it so well. We hide ourselves in our work, in our parenting, in our volunteering, in anything that we think will make us worthy enough despite our sin. But nothing can accomplish that for us but the blood of Jesus. And these words from Samuel remind us of that. EVEN THOUGH is not a call to ignore what we've done, it's a charge to GO BACK despite what we've done. It's an invitation to begin again.

It would seem to me that some of us have battles we feel like we've been fighting for weeks, months, maybe even years. It would also seem to me that God is not getting tired of watching us do what feels like running in circles because He sees how with each lap around the track our time gets faster and faster until we might eventually fling ourself off it and straight into His arms finally admitting we can't do it on our own anymore. And honestly, that might just be the most welcomed thought of the century. That eventually our hurried pace will hurl us straight to His waiting posture, like a parent holding out their arms as the first steps are taken by the little life that just turned one, and then collapses into the safest place they know.

I don't know what your journey has been, I only know mine. I know where my exhaustion feels lethal. So maybe instead of hiding what we think is a fatal flaw and trying to cover it up with fig leaves we can start to remember the way things were meant to be, exposed. Not for shame or embarrassment, but so that the healing touches that need to come have full and complete access to the areas that are most wounded that we keep trying to fix ourselves. Maybe then we can instead worship the LORD with all our heart and begin again. 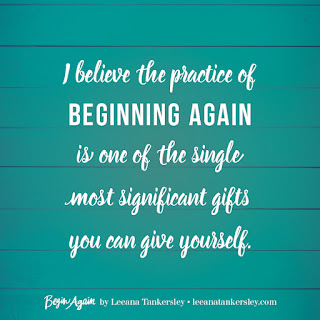