Scrolling through facebook I saw a sponsored ad for the new movie Paul, Apostle of Christ. The ad had this quote, "Men do not die for things they doubt."

When I first read the words I thought to myelf that the sentiment is definitely true. I mean if you had any doubt about something you would certainly not give your life for it. That's just common sense.

But then I thought about it more. And more. And I couldn't let it go.

If we take it from the context of those who willingly gave their life for the spread of the gospel, then we know they had no doubt that Jesus is who He said He was and would do what He said He would do.

If we take it from the perspective of Jesus, the context gets just a little bit richer. Why? Because He willingly gave His life for us not only because He trusted His Father, our Father, but because whether or not we believe in Him, He believes in us. He believes we are worth it.

So the only question left to answer is whether or not we think He is worth dying for.

I had a conversation yesterday with my cousin about the decisions we both need to make to better our health as much as we can. Truthfully, it's all in God's hands, but we are both certainly capable of making decisions that lead us to a better or worse state of being. And the reality is that knowing what needs to be done and doing it are very different things.

For example, in  1 Samuel 2-3, we see that Eli knew his sons were making horrible decisions and sinning against the LORD but he didn't do anything about it beyond confronting them. Of course this ended with a curse from God on the family line which is not good. The point is that with knowledge comes responsibility.

So, if we know the truth about ourselves and things that need to be done, and they are things that will ultimately honor God, they should be easy to do, right?

When I think about the death and resurrection of Jesus and the fact that He did not doubt God's goodness, promise to follow through with the plan, or that His desire was for us all to come to Him, I see someone who died not doubting me. And while I still may have fears of letting go of what I know and what I am most used to, my doubt does not usurp His commitment to see the things He's started through to completion.

Jesus told us that in order to live, we must die. And as Ann Voskamp has written, that often looks like a thousand little deaths over time. We might want it all to just go at once, but as long as we are on this earth, we will have our flesh to contend with.

Tomorrow a new book by Leeana Tankersley releases. It is called Begin Again, The Brave Practice of Releasing Hurt & Receiving Rest. As I have journeyed through this book, I can tell you without hesitation, that it is most beneficial with this concept of dying. Why? Because even though we won't get it right every single time we are presented with the opportunity, each new choice we are presented with gives us the opportunity to begin again.

As Jesus wasn't bound by the chains of death, we aren't either. What's hardest for us to grasp is that those chains have been cut in our lives, we just either still feel their weight or have put the shackles back on ourselves. But thankfully, we serve a God that is bigger than our doubt and one who gives enough grace to accept the thousand little deaths we must endure as He grows our faith, trust, and confidence in Him.

While we could walk away with these thoughts, ready to storm the gates of hell, and never doubt another moment, I think it's better to leave it like this: The moment we sense a death that we refuse to accept we simply need to acknowledge our doubt, determine if we are ready, and reagardless of the decision we make to cling to what's familiar or die, we simply choose to begin again. 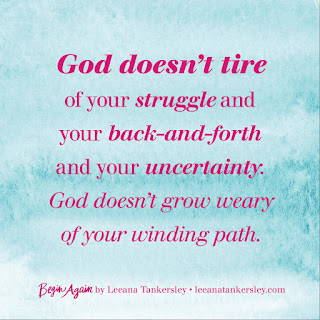