In May of 2013 I believe, I was pretty fanatical with some fitness goals I had. One of them was to be able to go from lying flat on my back, come up to a sit up position, and stand up without the use of my hands. Suprisingly one of the best ways to practice this move until you can do it independently is with weights in your hands because they counter balance you as you begin to stand so you don't fall backwards. However, before I got to that point, I had the brilliant idea of having my husband help me by putting his feet on top of mine, then grabbing my hands, while I stood up. I certainly got stronger and more adept at the move, but the weight of his foot on top of mine caused a stress fracture at the base of the 3rd metatarsal. It hurt.

Several months later, at Halloween time, I was out with the kids and stepped on an uneven sidewalk. My foot rotated and the tendon at the base of the fifth metatarsal on my right foot snapped the bone. That hurt signifcantly more, swelled considerably, and put me in boot for seven long weeks. I couldn't drive. That hurt in a different way.

After that healed, we were at an Easter Brunch with family in Erie. I was wearing a dress and heels. My husband offered to get the car when we were done eating, but I insisted I could walk through the parking lot. My heel got caught in a crack and my left ankle twisted. I ignored it for a week until it was the size of a softball. It has never fully recovered.

Three injuries in less than a year. We joked that we should have been given a frequent shopper card with the foot and ankle doctor that treated me. I have the boot and the walking shoe still.....just in case. Through each injury, I found ways around my limitations in order to remain active. I am sure there were times I pushed too hard and the discomfort later in the day was always evidence of my poor decisions.

While I survived each of these mishaps, there are reminders that linger in the way of remaining soft tissue damage and mild discomfort if I wear heels for too long. But these three separate injuries have also been a blessing of sorts, particularly the second one that forced me to take some much needed rest and resulted in some amazing bonding time with my sweet fur baby, Oreo. To this day he waits for me to get on the couch and curls up next to me for a nap, just like we did a lot of the days I was stuck at home, unable to drive.

But these three injuries have given me a new, unanticipated blessing, as well. Earlier today I read Psalm 18. Verse 36 says: You provide a broad path for my feet, so that my ankles do not give way. For the girl who wears a size 10 or 11 shoe, has had 3 injuries, and is prone to moments of extreme pride and stubbornness, this is an amazing promise.

Something that I find so incredible about God is that He understands our humanity. He knows we aren't going to do things perfectly everytime or as quickly as He might prefer we do them. He also knows that what we hear is going to be clouded by what we really want to hear, as well. And this broad path allows for that. He isn't calling us to walk a balance beam that gives little room before we crash and fall, but He also isn't giving us what's used for a floor routine so that we can run, leap, and tumble around until we go straight from corner to corner. He wants us to walk with Him but with enough freedom of who He made us to be that it looks more like a dance with Him leading than a stiff legged death march.

What's so sweet about this, is that the older we get, the stronger our ankles become because we mature in our relationship with Christ, in our obedience to His Spirit, and in our desire to please Him without hesitation.  And instead of narrowing the path, He leads us up the mountains with the feet of a deer to stand on the heights and see His glory displayed as He arms us with strength and keeps our way secure.

Father, we thank you that You don't expect pefection but that instead You examine our hearts to know that we are following hard after You. Hold our hand as we walk the broad path You have given us, lead us in a dance that let's us express who You have made us to be, and strengthen our feet to climb the great heights You intend us to stand upon and see Your glory. We love You. Amen. 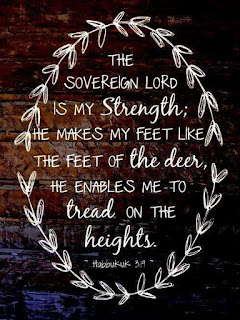