First True Story: If I hear something that sparks a thought, I will chase that rabbit down like a mad woman. I imagine I can be a distraction to my husband in church as I feverishly flip through my Bible trying to find something I wrote or underlined at some point that correlates with what I just heard.

Second True Story: Sometimes I read a verse that I've read at least fifty times before and it's as if I'm seeing it for the first time. It's in moments like these that I question my level of intelligence.

Romans 12:2 Do not conform to the pattern of this world, but be transformed by the renewing of your mind. Then you will be able to test and approve what God's will is, his good, pleasing, and perfect will.

Realization 2: Once you recognize the pattern of this world, you must then determine if you are prone to conforming to it.

Realization 3: If you are aware that you are prone to conforming to it, you must then determine what you must do in opposition to it.

Realization 4: Once you know what you must do to guard yourself against it, this becomes your pleasant place where the boundary lines have been drawn by God.

Realization 5: Once you can acknowledge your God-given boundary lines, they become your plumb line by which you can determine the good, pleasing and perfect will of God for how he created you.

The space occupied above our shoulders and between our ears can be a mighty dangerous place. We believe that lies are the truth and that the truth is a bunch of lies. We are willing to accept the negative things that are said about us and dismiss the positive. We know that we are to have the mind of Christ and take our thoughts captive, but we aren't (or at least I haven't been) told how to do that. And without knowing where to start, you can read it all you want from beginning to end, but if you aren't aware of what you are fighting against and fighting for, you are swinging your sword at the air surrounding you.

I've got lists from the web and in books that tell me how God sees me and never once have I thought to pray them over myself to break the chains of the lies that have held me bound. And why? Because I didn't know I should. They have always just been my 'go to' when I'm feeling badly to remind myself of the truth. But unless I partner them with the counterfeit truth I've adopted, I basically have a list of positive affirmations that have an inherent power I haven't tapped into: the power to transform my mind.

I know I've said before that my nickname could be blonder than she appears to be, but I'm guessing if I've missed this, I might not be the only one. So you have an assignment. Think about the ways Satan tends to dupe you.....realizing that if he's done it once, he'll probably try to do it again, but with a subtle difference. Know that his methods are the patterns of this world that we have to rally and fight against. And then seek out God's truth that combats the lies, traps, and patterns that tangle you up, and actively pray against them. And then maybe, just maybe, with time and intentionality, we'll have the renewed minds we've been desperate to achieve but didn't know how to get. 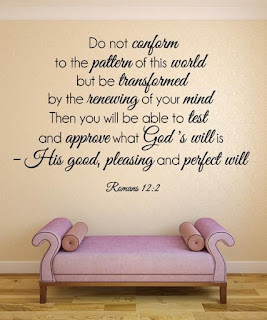