Hangry: bad tempered or irritable as a result of hunger

When I was growing up, there were girls I considered my enemy because they considered me theirs. I could never figure out why the ones who didn't like me, didn't like me, because I was painfully shy and unpopular. I remember one time in high school walking home from the bus and a group of the popular girls drove by and one of them screamed my name and defined me with an expletive. To this day I don't know why. Of course 26 years later I don't really care either.

When I think back on those days and what an 'enemy' was, it's interesting to think about the characteristics they had in common with my true enemy. The ones that walked around in the school hallways wanted to kill my reputation, steal any chance of friendships I might have, and destroy any joy I felt. My true enemy attempts to do the same thing.

The girls in school I just ignored. Satan, that doesn't always work out so well for me. He can be pretty relentless in his pursuit of my mind and heart. And when I think about how Jesus defeated him in the desert with the word of God it made a verse in Proverbs from yesterday pretty interesting.

Proverbs 25:21 says: If your enemy is hungry, give him food to eat; if he is thirsty, give him water to drink.

As soon as I read that verse, I immediately thought about Satan prowling around like a lion looking for someone to devour. I could be wrong, but the thought of a lion devouring something seems to me would be the likely result of being ravenously hungry. But for as many times as I have taken thoughts captive to make them obedient to Christ, or spoken promises over lies, I never once thought about trying to shove a feeding tube into Satan or an IV filled with fluid to make him stop.

Satan was kicked out of heaven because he wanted power. He was craving it. And all this time that he spends trying to get at us, is because he's mad at God and attacks what God loves. We know this. But I wonder if we looked at our enemy as just being hangry if we'd be more inclined to try to force feed him the last things he wants to ingest: the bread of life and living water.

I don't know if it helps anyone but me to see it like this, but knowing how moody I can get when I'm hungry or craving something, I wonder if he picks his targets the same way. If he wants something sweet, does he go after the woman who's always serving others with a smile? If he needs protein, is he attacking the girl who has incredible leadership skills and is influencing her friends for Jesus? And if he's hungry for carbs, is he laser focused on the little one that is full of energy and leaves a bit of sparkle everywhere she goes? I don't think he's random in his attacks. I think he's pretty methodical about taking what God intends for good and trying to distort it in everyone's eyes.

It's so important that we keep ourselves well fed so that we are able to take our stand against the devil's schemes. And maybe as we are feasting on God's word, we can make a plate of leftovers for when the enemy shows up hangry to give him a dose of holy indigestion. 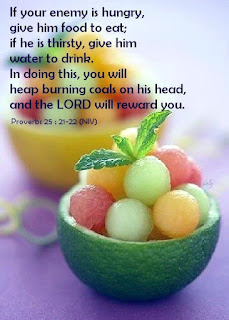