It's easy to for us to tell ourselves that no one wants to hear our story or will care about it. We take what we see happening in the world and consider our triumphs and tragedies as a mere drop in the bucket and keep things to ourselves. But in doing so, we rob God of the glory he so richly deserves because of the miracles he performs in us that others then get to witness.

11 years ago I became a Christian, meaning I really got it. Shortly after that I bought a book written by some obscure author that I had no idea who she was. Little did I know that this 'Beth Moore' was going to be used to change my life forever.

I'm pretty sure when God made me he put in some pretty strong obsessive tendencies. Once I bought the devotional she had written called David: 90 Days to a Heart Like His, I had to find everything she'd done. A quick google search sent me to a tv program that she was on every week, and one particular episode where she talked about how she learned to love to read God's word. She read with passion and conviction like it was a novel rather than a textbook. This blew me away. It also opened up my eyes to see all that it held.

And now, 11 years later, my desire to read my Bible is stronger than ever. Once we can see all that it holds from cover to cover, it becomes more necessary than the physical food we eat.

The chances of me meeting Beth Moore this side of heaven are probably not great. But I can tell you that her willingness to share her past and all that she's learned gave me a glimpse of what a redeemed life could potentially look like. She openly puts herself out there to show that God is capable of changing what we see as a pile of ashes into a thing of beauty. And her bravery to be honest about where she's come from and what she has gone through has given me the courage I need to tell my experiences.

We know that what we go through is not just for us. We are meant to use it to encourage others. But I don't know that I would have ever gotten that to the degree I have if it weren't for God working in her life and then using her life to work in mine.

Ya know, when Jesus performed some of the miracles and healings he did, he told the people not to tell anyone. Did they listen? No. They might as well have taken out full paged ads in the New York Times and bought commercial airtime during the Superbowl. But we, who have been commissioned to tell others, tend to live pretty tight lipped. Sad, isn't it.

So instead, let's show how thankful we are for the lives that have impacted ours, and the way they have impacted ours, by sharing our stories. Beth Moore showed me how to do that with class, elegance, and kingdom perspective. And for that I am beyond thankful. 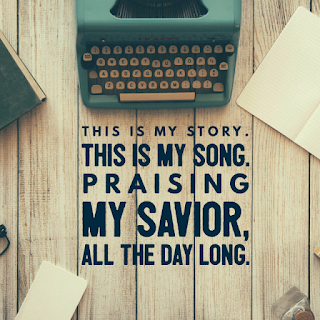