Even if you don't listen to Garth Brooks, you're probably at least a little familiar with the song Unanswered Prayers. The refrain goes like this:

Now, I would contend that God does not leave any prayer unanswered. I would say that the answer to the prayer was actually no, we just can't always recognize it as a no until a different, and always better solution, is given.

I will grant you there are a ton of prayers that I have shot up to God that were seemlingly unanswered. And I can tell you that there have been prayers I prayed that I stopped praying for one reason or another that were still valid requests and were the online equivalent to a We'll let you know when your requested item is back in stock that were answered so long after the fact that I didn't even recognize them at first. My guess is that you could say the same.

But for all the prayers God hasn't "answered" there is one in particular that I am thankful for today.

From the time I started dating in high school, I really always thought that 'this guy' (whoever I was dating at the time) was always the one for me. And not that any of them were really bad or anything, they all had some great qualities, but if you saw the differences between them, you'd be certain to think that I was clearly out of my mind. I went from super 'preppy' (yes, I know how much I just dated myself) to liking the guys that listend to heavy metal. Seriously y'all, I bought and learned all the songs on a Faith No More tape. That says something. (And by the way, the guy I liked at that time, hardly even knew I existed but I thought common interest.)

I don't know what your unanswered prayers are that you can sit down and thank God for, but I know you have them. So maybe today as we think about all we are thankful for, we need to recognize just how many prayers really have been answered perfectly, just not as expected or anticipated. 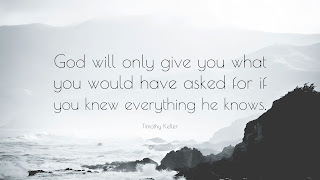