May 2008 ~ January 2012 on 150mg of imuran
February 2012 ~ off imuran for surgery
Early 2016 ~ mammogram and follow up asked questions about lymph node
Late 2016 ~ questioning lymph node, additional test, determined by visual appearance to be reactive to systemic lupus
Even later 2016 ~ Call from primary doctor that he thinks I should get it checked further "just to be sure"
January 2017 ~ meet with surgeon to decide if we should follow through with biopsy
January 2017 ~ calls to rheumatologist, mom, and sister, discussions with husband and friends
February 2017 ~ biopsy performed and determined to be reactive to lupus (My lymph nodes are HUGE compared to what they should be....normal is considered 1cm in diameter, one of mine was 2.6cm)
August 2017 ~ lupus becomes active again and I am put back on 150mg of imuran

When my doctor's office called and said that he wanted me to have the lymph node that he'd already determined was probably nothing checked, I was a little irriatated. I thought it was behind me and over. I didn't want to deal with it but I also knew that if I ignored it and a year later it turned out it was a problem, I'd regret not. Of course we were all relieved when we found out it was nothing of consequence.

By the time of the surgery, I'd been off imuran for 5 years. That was a miracle in itself. Little did I know I'd be back on it at the end of the summer. But God did and he certainly prepared the way.

If I had never had the biopsy done, we wouldn't have a reference point to when my lymph nodes were 'normal' just in case. Knowing myself, I'd likely be nervous about being on imuran again if we hadn't gotten in checked. But we do know when they were just big and we do know that up until this point, they were fine. (Nothing wrong with them now either.)

As much as I've known this to be true in other circumstances, when this little hiccup in my plans showed up, there was a part of me that was pretty ticked off. If I'd been a bit more mature about it, I would have acknowledged the fact that God was clearly up to something. But all I could think about was having another surgery, more anesthesia, restrictions, and a scar. (The scar by the way is barely visible. #GreatSurgeon) But God......always but God.

We need to learn to trust that his interventions always have a purpose. Sometimes we see them quickly (like in six months) and sometimes they take years. But they are not because he's bored or because he likes to pick up the snowglobe of our lives and shake things up just for fun. They are for our good.

Whatever we have gone through, are currently dealing with, or have coming in the future, we can believe that he knows, he's prepared, and he's preparing us. Nothing catches God off guard and he's not asleep at the wheel. He's watching over everything that impacts our lives and he's going to see us through whatever it is. 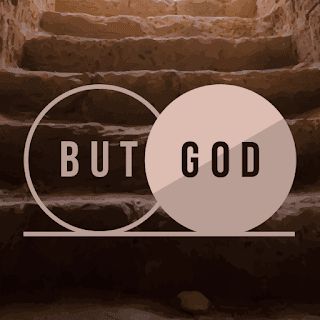