I had originally planned to only go through Thanksgiving, but there is one more thing I have to share because it is nothing short of a miracle.

When I first started working out regularly in  my early twenties, it took about 2.2 seconds for me to become obsessive. What started out as swimming laps at the gym, turned into three hour workouts that added a stairmaster, a stationary bike, a cross-robics machine, and weight training. No lie. Every day. And heaven forbid I couldn't get it all in because I had to be at work.

After about 2 years of this, I met my husband. Suddenly spending time with him became much more important. I still worked out but not with quite so much fervor.

Then from a conversation with a friend, I started my journey again in late 2011 with Jillian Michaels. You know, go big or go home.

Again, it took about 2.2 seconds for me to become obsessive. Except now, it was worse. Not because my workouts were longer, but because my workouts were never hard enough. I had to push farther and farther every day. I mean, if I were training for something, great, but I wasn't. I just had to be able to do more. (Clearly, you can see I have a problem with addiction type behavior.)

Anyway, aside from the mental pressure I was putting on myself, there was also quite a bit of emotional pressure. I have a food problem. A huge one. I love food. And exercise, while good for my body, has always been my ticket to food. And so the more I would eat, the more I would push. And as much as I love working out, it was also a sort of punishment for lack of control/discipline. And if I've learned anything from Jillian Michaels over the years, it's this: You can not out exercise a bad diet. And so you know, that includes healthy food. Too much food, is too much food. Period.

But recently, God started changing something in my heart. And I realized I can't do as much physically because of this stupid flare (#IHateLupus). I'm entirely too weak and tired to do what I know I've been able to in the past. And if I've been convicted of anything, it's that rest is important. I mean, I don't even blog on Sunday's now. (The 'rest' post that shows up, is scheduled on Saturday's to post automatically at midnight and it's just a picture reminding us to rest.)

Okay, I didn't eat stuffing. I made quinoa and put in the celery, oninos, butter, and poultry seasoning and put some gravy on it. (FYI, it was fabulous.) But for the first time, there was green bean casserole that my cousins wife made. And I ate it! (Oh so good!) And I had a small slice of apple pie, pumpkin pie, and just a bite of my man child's cupcake. And I don't hate myself today. I am not beating myself up for it. And I am not regretting it. It was Thanksgiving and I gave thanks for what was in front of me because sometimes it's okay to step outside the norm.

I don't know what miracles God has in store for me in the future, but this is one I never saw coming. Like you just don't even know. And I can tell you, promise you in fact, that God has one in store for you in the area you think it's not even a remote possibility. Yes, it did take years, a lot of years to get here. And it took a lot of hard lessons. But each one was worth it. Because as much as the green beans, cranberry sauce, mashed potatoes, gravy, rolls, turkey, and desserts were incredible, none of them even come close to what it's like to taste and see that the Lord is good. 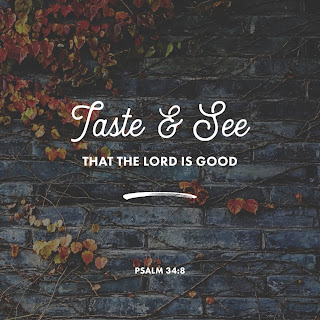