Yesterday I picked up my hair dryer and heard a buzzing noise. Not knowing where it was coming from, I ran out of my bedroom, down the hallway, knocked a picture off the wall, all th while making a rather girly squealing noise. Apparently there was a fly stuck in our bedroom ceiling light.

Later in the day I was in our bedroom and the fly buzzed again. And I ran down the hallway again. At least this time I didn't knock a picture off the wall. But I still ran. Thankfully my husband came to the rescue, took down the light, and annihilated the fly.

Now, if you look at this from different angles you see different things.

~Loud buzzing noise of unknown cause creates appropriate response from unsuspecting victim. (I mean how could I know it wasn't a bee? I certainly wasn't expecting a fly in November!)

~Loud buzzing noise of known cause and origin creates completely unnecessary reponse from a grown woman who is a zillion times larger than it.

I am quite certain if one of my two offspring had their iPods ready and had caught either instance of me running down the hallway from A FLY, we could undoubtedly be winners on AFV. I am also reasonably certain that I will never, ever, ever go on Ellen DeGeneres' show (not like I'd be invited but still) because I am absolutely certain my family would share this story and a human dressed as a giant fly would show up behind me to scare me on tv. Yes, they love me, but they also aren't about to miss a good laugh at my expense.

But as I sit here and think about this, I am reminded of what so many of us know to be true: the Bible tells us 365 times to fear not. Granted, I don't think there is a verse that says Thou shall fear not flys, but that's not the point. We fear things that haven't even happened and run scared, cowering in corners, and paralyzed from any action because of what might happen. Granted my greatest fear in not knowing what was creating the buzz was the possibility of me, one of my kids, my husband, or our cat getting stung. But being afraid of things that could happen but have no clear and present threat? That seems a bit unreasonable.

Now, I am not saying I don't live with a ton of fears. Heaven knows I do, most of which have materialized and been magnified since giving birth. But I have to ask myself what they are costing me. And what am I willing to give up in order to give in to my fears. Because that's what it amounts to.....a trade.

So today, I am thankful that God thought to include 365 times we are not to fear in His word. I'm supposing He did so because He knew we would need constant reminders. So instead of keeping our eyes on all that we imagine might happen, let's keep our focus on all that God has done to protect us, and realize we have nothing to fear. 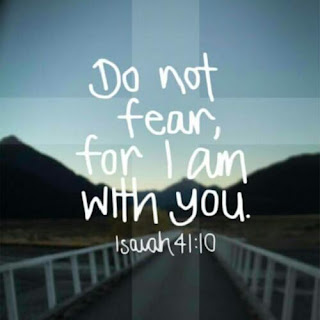