One of Alan Rickman's last movies was Eye in the Sky.  The movie is about radicals that are wanted for their terrorist activities.  The plot of the movie is to capture, not kill, so that they may be tried for their crimes.  However, through an unexpected turn of events, the mission changes for the greater good.  The 'eye in the sky' is the military's ability to see what is happening in order to ensure a successful outcome.  The movie was excellent and has given me a greater appreciation for what those who serve our country either in the government or military must deal with and the difficult, and almost impossible, decisions they are responsible to make.

As we go about our days, we only see a portion of what is going on around us.  We may see someone over-reacting to a situation in a store and think they've likely lost their mind, but we have no idea what initiated the response.  Chances are it wasn't what they are frustrated with in that moment. Their marriage might have just ended, they might have gotten a call from a doctor, their child could have made a costly mistake, or any number of other things that are invisible from our perspective.  And while I am not excusing unkind behavior, I am asking that we consider how much we don't know before we form opinions on what we do.

In 1 Peter 5:10 we read:  And the God of all grace, who called you to His eternal glory in Christ, after you have suffered a little while, will Himself restore you and make you strong, firm, and steadfast.

I do not know a single person that likes to suffer.  Pain is not something we are likely to volunteer to experience.  Unless it were to spare somone we love.  If you have ever thought that you would trade places with someone if you could, you understand.  You want to bear their pain for them so that they can stop suffering.  With the focus being on love, the thought of suffering is considerably more tolerable and perhaps even joyful.

The dilemma though, is that when we don't understand why we are suffering, we often are desperate to find the reason.  And the reality is, we probably won't.  Not now anyway.

But what if we were to pick up our crosses and carry them believing that we are suffering to spare another?  What if we are enduring it so that someone we desperately want to see in heaven finds their hope in Jesus because they are watching us?  What if the situation we so desperately want to change is in fact God's grace reaching out to those who don't know Him yet?  Can we have faith enough to believe it's not without purpose to persevere until He does restore us?

2 Corinthians 5:20 reads:  We are therefore Christ's ambassadors, as though God was making His appeal through us.  Just like Jesus suffered and died for us, we are called to suffer and die to self for the sake of others.  It is the ultimate act of love.  Sometimes I think a lot of my suffering is self-inflicted in the form of resistance.  The harder I push against what is trying to change me, the more exhausted I become therefore increasing the suffering.  But if I were to bend to His touch to reshape me?  Not only would it hurt less, but I would know I am being shaped into something more beautiful.

I can't say I believe that any of us will welcome suffering with open arms, or invite it with enthusiasm.  But my prayer is that when it finds us, or we are called to it, that we will rely on the promises of God to restore us after we have endured it for a little while.  He can see all of what is happening and why.  The only thing we can do is ask Him for faith strong enough to believe He is for us.

Father, help me to submit to the things You have called me to endure that I wish I could change. Give me the faith to believe that it all has a purpose and that if I were to know it, I would have volunteered anyway.  You have called me to walk by faith and not sight, trusting that You are good. Thank you for the ability to look back and see Your faithfulness in the past to strenghten me now.  I know You are good, that You are able, and that You are always for me.  Amen. 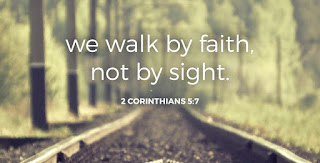