"God isn't into patch jobs or quick fixes. He is, however, into filling
in the cracks we have created and tried to fix ourselves the easy way."

A couple days ago I had my husband pop the hood of my car to check the battery terminals to see if they needed to be cleaned. Upon inspection we noticed a considerable amount of stuff that needed to be addressed. So, I called the dealership, made the appointment, and went in anticipation of a quick fix. Sadly that's not quite what happened.

When I sat in the waiting room, I was suprised to hear my name so quickly. As you might have guessed, this wasn't a good sign. A young man came and sat next to me with a picture of my battery. He explained to me why the build up was happening and then showed me the crack in my battery. What was supposed to be essentially a quick fix was now turning into a full blown replacement. Needless to say I was in the waiting room a bit longer than I anticipated.

In retrospect, it was nice to just be able to sit for a few minutes with nothing to do but watch CBS This Morning. I rarely watch tv and so to just be there, completely unable to do anything else, was a nice change of pace. As you might have assumed, there was talk of politics and they were interviewing Senator McCain. (I promise this isn't a politcal post.)

As is the case with most waiting room tv's, the closed captioning option was selected. What's fun about this option is that what comes up on the text may not match exactly what the person said. Or, if it does match what they said phonetically, it still isn't the right set of words.

Senator McCain mentioned the Ukraine. Instead of spelling out the country, it spelled out two words: you crane. While in the moment the error made me smile, almost 24 hours later, it seems rather prophetic.

So many of us are striving for things we think are going to make us happy. More money, a better house, a newer car, a prestigious career. But none of those 'things' are going to fill in any cracks we might have in the battery that keeps us running smoothly. Our hearts aren't designed to be maintained by temporary pleasures, they're made to be maintained by an unlimited supply source. A source that prevents corroding build up, a source that keeps the terminals properly attached to supply the energy needed to function, a source that allows everything good to flow from it.

So often I find myself craning my neck. I try to stretch it out to see as far into the future as I can because I want to know that things are improving, that they will someday be better, and that the difficult moments will pass forever. But one of those I can only see the evidence of through what God clearly reveals and the other two won't become reality until I'm in heaven. And so continuing to stretch out as far as I can seems a rather fruitless notion.

As I read Romans 5 this morning, the words in verse 5 made my cracked heart soar:

And hope does not put us to shame, because God's love has been poured
out into our hearts through the Holy Spirit, who has been given to us.

God isn't into patch jobs or quick fixes. He is, however, into filling in the cracks we have created and tried to fix ourselves the easy way. But like all short-cuts, they usually end up delaying the intended outcome.

I wasn't thrilled that what I thought would be a minimal cost repair turned into a much bigger expense, but if getting me alone in front of a tv is what the Lord needed to do to tell me something, then I can say it was definitely worth every penny. Even the most secular of things, in His hands, is a powerful tool. Mis-spellings and all.

Father, every time I forget just how creative You are, You pull out all the stops to wow me. Thank you for pursuing my heart even in the most mundane task of sitting in a waiting room. Your grace is not just limitless but also uninhibited by location. If craning my neck will be a hard habit to break, help me to only stick it out as far as it will go in seeking You.  Amen. 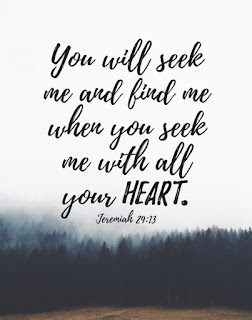