This morning when I woke up I didn't have internet.  Or phone.  Or cable.  I suppose the winds were likely to blame.  By the time it came back on, it had fluctuated twice and I didn't want to chance loosing anything I'd written so I figured I'd write later.

When later arrived, I came home to no power.  Like none.  As in I couldn't reheat a cup of coffee.  So I opted to do the only logical thing I could do.  I read until my eyes got heavy, set a timer, and took a nap with my sweet Oreo.  And almost as if by design, the power came back on with 2 minutes left on my nap timer.  #GodIsGood

Being without power is absolutely no fun.  And you realize your limited capacity to understand the concept when you go to the bathroom and still try to turn on the light.  Yes, it's likely just out of habit but when the hum of the refrigerator isn't there and it's eerily quiet, you would think you might remember.  Ironically, you don't remember to turn the light switch off and so when the power comes back on you wonder, "Did I leave the bathroom light on when I left?"  Ummm, no.

We don't realize how dependent we are on something we take for granted until it is stripped away. Even though we were only without electricity for approximately an hour, it felt like an inconvenience of epic proportions.  I'm immediately thinking of the food in the fridge in case it lasts until dinner, how I will make my lunch which required heating, and an inability to check email.  Heaven forbid you remain inaccessible for a minute in this world.

But more important, it makes me think of what my day would have looked like if I'd woken up with no power instead of just no internet.  Granted I would have still been able to pray, but for the time of day (middle of the night) that I get up, there is no light.  Without light, I can't read.  No Bible in the morning = grumpy mommy all.day.long.

I know plenty of people that don't spend time in prayer or reading God's word.  And seemingly they function just fine.  But just like we don't understand what it's like to be without power until we are, they have no idea what it's like to live with power because they've not tried.  I'd be willing to bet if they did and then tried to go without, their perspective would change drastically, dramatically, and quickly.

But even beyond that, it makes me think about the things I can't do, don't do, or don't even attempt to do because I see my limitations.  It's like I completely forget the truth of the word I pour over in the morning and fail to recognize that I have limitless power available to me to do what I can't do naturally.  things like being the calm in the middle of someone's emotional storm instead of a driving wind or a breath of fresh air in the middle of a tirade instead of a catalyst to a firestorm when someone I love has been hurt.  We have access to a power source that is greater than anything we will ever face and it seems we are great at filling up for the day like we would a hybrid car but horrible at accessing it when it's needed most.

It's been 8 days since Lent started.  8 days since I have been inking that sharpie marker cross on my wrist. There are times I see it bold and clear to remind me to die those thousand little deaths and there are times I see it after I've miserably fallen short of remembering whose I am and what sacrifice looks like.  But maybe for the next 8 days instead of just focusing on those moments where I put my needs and wants aside, I need to see this cross as a reminder of the resurrection power that lives in me that's meant to make a difference in the world I live.  After all, a quickly lifted prayer, a hand held, and a shoulder offered are often much more valuable than anything else tangible I can give.  Because time is our most non-renewable resource and the ultimate gift you can give to someone in need.

Jesus, I can not imagine a day without you.  I can't even think of how I would start, function, or survive without being a completely dysfunctional wife and mother, let alone any of the other roles You have given me.  Thank You for making me see just how dependent I am on You through something as simple as a power outage.  While the inconvenience of it wasn't welcomed at first, the truth of what you revealed through it, was worth every second.  Amen. 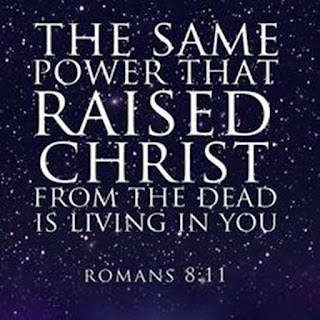