Please get past the first part of this post. You might be tempted to think it's going somewhere it isn't. This is a story about God's faithfulness to meet you exactly where you are and bringing about things in a way that He knows you will respond.

Late last spring I was doing an online Bible study with someone I followed on facebook. Shortly after the study began a conversation started through facebook messenger, and by the time all was said and done, I had become a Beachbody Coach. What I didn't know at the time was that God was going to use my 'yes' to start something in me that I could not have foreseen with a flashlight, a map, and explicit directions.

Because I had previously been in a direct sales position before, I knew that this time I wanted it to be different. And so I made a deal with  myself that I would be accountable to doing everything and starting it all with prayer. That one decision lead to reading the gospel of John and journaling every day in a notebook. Not long into this new practice of journaling, I got to the part where Jesus tells the pharisees that they search the Scriptures looking for Him but it is they that testify about Him. This startling announcement by Jesus to the religious leaders turned my world upside down. It was 51 days past the day I said yes.

What I didn't know until I read this was that I had been doing the same thing unknowingly. Just a few short months before this, in the middle of a complete meltdown at a doctor's appointment, I told my rheumatologist that I didn't understand why things were so difficult and why I couldn't handle my emotions or stress. I reminded her that I was in a Bible study with some incredible women, I told her that I read my Bible every morning, I did independent studying on my own. And at the end of my resume of godly Christian activities, I told her that I knew the truth but that somehow it wasn't enough. It didn't make sense that I couldn't deal with my stuff. She looked at me and asked me if she could pray for me. Of course I said yes.

That moment, combined with starting to coach and wanting to do it right, led to the major revelation that somehow I had managed to completely dissociate reading and memorizing Scripture from a relationship with Jesus. Mind you, I thought I had one, and to an extent, I did. But not one like I had seen in other people and I didn't understand why. They had something I clearly didn't and I had no clue how to get it.

What's so ironic is that my 'go to' activity, reading my Bible wasn't going to solve the problem. I had to do some serious searching for answers to figure out how this was possible.

Slowly but surely I started reading more and more books. Not about this subject specifically but just things that I knew I needed to read. Ann Voskamp, Kyle Idleman, Rebekah Rose Lyons, Judah Smith, Parker Palmer, and Craig Groeschel have been helping me discover some missing links and cracks in my foundation of faith.

As I am currently reading One Thousand Gifts, I have learned a few things in the past 24 hours that combined with my Bible reading plan have opened my eyes to what God has needed me to discover.

(1) Picking up a pen isn't painful and ink can be cheap medicine. (p. 49)
(2) When you don't have a name for something, you're haunted by shadows. It ages you. But when you can name something... (p.52)
(3) To name a thing is to manifest the meaning and value God gave it, to know it as coming from God and to know its place and function within the cosmos created by God. To name a thing, in other words, is to bless God for it and in it. (p.53 a quote from Alexander Schememann from For the Life of the World: Sacraments and Orthodoxy)
(4) Pslam 130:5 I wait for the Lord, my whole being waits, and in His word, I put my hope.

If I had not said yes to being a coach (which by the way I no longer am), I don't know that this journey would have started. But God knew the intentions of my heart and used them to open my eyes to a problem.

God used what I then realized was a problem to be able to name it and then seek to solve it. Until that happened, I had no idea what was wrong.

Because I had a way to describe the problem, I was then able to look at it as a blessing because I knew that God wasn't going to leave me stuck.

Because of everything He has shown me since this all started, when I read Psalm 130 yesterday, several pieces of the puzzle fell into place.

When I first saw those words about putting hope in His word, I was immediately scared. That was my problem, so how on earth could it be my solution? I had invested so much time in knowledge that I didn't know how to realign my mind or my heart because I had done nothing but search Scriptures for information and miss Jesus in the process.

But in a way that only God can, He reminded me that this all began with John.....in the beginning, when there was the word, and the word became flesh and dwelt among us. And there it was, staring me in the face.


It's okay to put your hope in His word when you understand that the word
became flesh; the words on the page are His breath, but the life God
breathed into them came to die, rise, and give eternal life.

That was my disconnect. I read the words as an instruction manual missing the fact that they were Jesus telling me Himself everything God had told Him. And just as a fun sidenote, He reminded me that the entire reason that the word can judge the thoughts and attitudes of the heart, is because the word is Jesus and He knew what people were thinking when they never said a word.

This revelation opened my eyes to see Scripture in a completely different way. When I read this morning it wasn't so much about learning what to do or how to live, but truly spending time with Jesus as He imparted His wisdom to me because of what He wants to do in and through me. He is so much more concerned about getting me to the point where I can say I truly believe Him, trust Him, and know Him than He is about me memorizing words in order or having a procedural list when things go wrong.

I don't know what it's going to be like from this day forward. But I do know that this is the first time I've felt truly hopeful about what's possible. And knowing that this has been part of the plan all along leads me to believe that we are headed someplace really, really good. 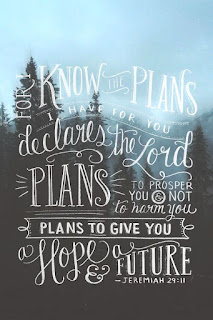