Deep Thoughts Late in the Afternoon

Several months ago I would post status updates on facebook that were labeled Deep Thoughts Early in the Morning. They were usually small but significant revelations from my quiet time. Typically they would occur when I would read something I had read many times previously but was now seeing with a greater depth, new dimension, or different perspective. Yesterday I had one of those moments.

In both Romans 8:34 and Hebrews 7:25, we read that Jesus intercedes for us. For some reason, probably because Easter was just a few weeks ago, I thought about Jesus praying for those who were crucifying Him, pleading, "Father, forgive them. They know not what they do."

But what if there is a deeper meaning to His intercession? What if He is interceding for us with those exact same words? What if it goes beyond us 'not knowing' to a much deeper place where our not knowing includes the consequences we will endure here because of our chioces? And I don't mean disciplinary consequences, I mean delayed blessings for obedience consequences. Things He wants to give us but can't until we first complete what He's given us to do. And until we do them, Jesus pleads on our behalf because we just don't get the signficance of our assignment in the big picture.

I can't say that I've done everything God has asked me to do. I can say that I am not only working on doing things as He assigns them, but I am also learning to listen more attentively for that still small voice. Because the truth is, even the things that seem trivial to most matter because they are what will be training our ears to hear.

Lord, we so desperately want to hear from you but we so easily forget you don't speak through a mighty wind, an earthquake, or a fire. You speak in the stillness because it makes us stop to listen before we proceed. Thank you for the gift of Jesus' intercession on our behalf when we don't realize what we are doing. We praise You for never giving up on us and always pursuing us with your never-ending love. Amen. 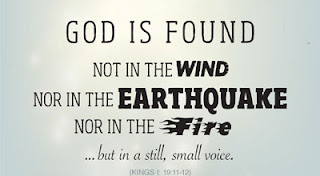