John 9:1-3 As He went along, He saw a man blind from birth. His disciples asked Him, "Rabbi, who sinned, this man or his parents, that he was born blind?" "Neither this man nor his parents sinned," said Jesus, "but this happened so that the works of God might be displayed in him."

John 11:4 When He heard this, Jesus said, "This sickness will not end in death. No, it is for God's glory so that God's Son may be glorified through it."

John 11:40 Then Jesus said, "Did I not tell you that if you believe, you will see the glory of God?"

When I write out my memory verse for the week, I typically don't see an immediate connection to something in my life. Personally I think God is planting seeds for a time to come when I will need those particular words of wisdom more than He is preparing my heart and mind for something that is about to happen. This week that hasn't quite been the case.

The first part of Psalm 46:10 says, "Be still and know that I am God." I'd be willing to be that we've all seen that, heard that, and memorized it. It's not a lot of words and it's a pretty good 'go to' when things are feeling completely out of control.

Like yesterday when we had some unexpected news. It's nothing truly awful but definitely not a good thing. It was certainly not welcomed information although it could have been significantly worse if God hadn't moved on our behalf several months ago.

But as I read about the death of Lazarus this morning, reflected on the story of the blind man, and thought of the many other accounts of miracles, it occurred to me that if I am going to be still and know that God is God, that goes way beyond a cerebral understanding of His position to a deep underlying belief that His character, attributes, and actions must also be considered in knowing Him.

The reality is, if I believe that He is who He says, then I have to know that our situation is not too far gone for His provision. If He can part the Red Sea, bring down the walls of Jericho, cause plagues, shut the mouth of a lion, keep 3 grown men safe and unharmed in a fire, hold back rain for three years, cause oil to keep flowing, flood the entire earth, have a man swallowed and later expelled by a whale, and give me a heart of flesh in exchange for my heart of stone, then clearly, what we are looking at, is a drop in the bucket.

And here's the most beautiful part of it all: EVEN IF He doesn't fix it, even if it doesn't work out the way we hope, and even if it makes things just a little bit more complicated, He is still God, He is still good, and all our hope is still in Him. Why? Because at the end of the day, He gives, He takes away, He plans, He provides, and He is. And truthfully in the grand scheme of things, I would rather have things the way He wants them than manipulating things to the way I want them because His past faithfulness proves His way is always better.

Lord, as much as this has caught us off guard, You are well prepared in either giving us a solution, providing a miracle, or filling us with Your sufficient grace to adjust. Whatever You have planned is what we want. Of course we want you to provide the miracle, but even if You don't, as long as You get the glory in whatever outcome passes, we will praise you and remain still, knowing You are God. Amen. 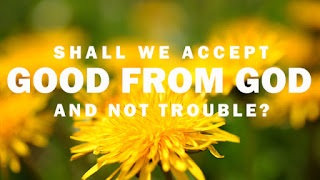