This past Sunday was cloudy, overcast, and consistently looking like it was going to rain. Despite the sky looking rather ominous, I packed up my kids and headed to the pool. It was the second day it was open and we were desperate to have just that little taste of what is to come once school officially ends.

While the kids were swimming, one of the guards was ridding the pool of all the debris that lands in the water when the wind blows. When in front of me, he told the guard seated in the chair making sure all were safe, that he was going to turn the music down so that he would hear the first rumble of thunder and know to clear the pool. That never happened. We were there for 4 hours.

While I was thrilled that our time lasted much longer than I had anticipated, I was incredibly naive in our preparations. I had taken sunblock but figured there wasn't a point to putting it on because clouds, impending storms, and overcast skies. As I'm sure you know, this did not work out in our favor, particularly mine as I sat on a chair in one position the entire time.

Even though I went to the restroom several times, never once when I checked my hair in the mirror did I see the evidence of what the sun was doing to my shoulders or chest. Not once when back in my chair did I notice the discoloration of my shins. Why? Because it was so gradual.

An hour before we left when the sun did come out, I got sunblock on all of us, but for me, it was far too late. The damage was done. And when we got home the first thing I did was email my husband telling him I would appreciate not being given a lecture. (FYI, I don't normally get lectures for anything. But I have systemic lupus and this was just stupid on my part so truthfully I deserved one.)

But what I've come to realize is this. Just like the sunburn didn't happen all at once for me to notice it, that's exactly what it's like when God puts us through the refining process. We know we are being subjected to something that has potential to change us, but when the results seem slow in coming, we don't realize anything is different until we are smacked in the face with just how big a change has actually occurred. Thankfully while God's process my be uncomfortable at times, it doesn't typically leave you itchy and wanting to remove the top layer of your skin on a scratching post. #WorseThanChickenPox

While there are many lessons from this experience that I will take away (namely ALWAYS apply sunblock), I think the most important one is the realization that I can trust God through the methods He uses to transform me. Because even if I can't see what's happening as it's happening, I can be certain that what He's doing is making a difference and it will leave me better off than how He found me.

Lord, I know I attempt to put you on my timeclock. I see the deadlines looming of things I want to have accomplished by a certain time and I just assume that is the pace at which You are working. Rarely, if ever, has that been the case. Thank you for being patient with my impatience and giving me such a tangible, albeit itchy, reminder of your process. I would much rather go at Your pace anyway because that is always the one that yields the best results. I love you. Amen. 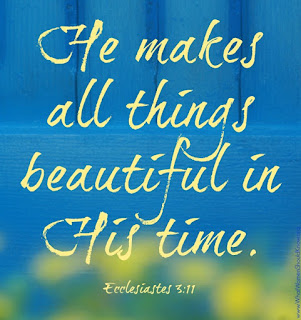