Philippians 2:3-8 Do nothing out of selfish ambition or vain conceit. Rather, in humility value others above yourselves, not looking to your own interests but each of you to the interest of the others. In your relationships with one another,  have the same mindset as Jesus: who, being in very nature God, did not consider equality with God something to be used to His own advantage; rather, He made Himself nothing by taking the very nature of a servant, being made in human likeness. And being found in the appearance of a man, He humbled Himself by becoming obedient to death, even death on a cross!

Every time I am reminded that Jesus came to serve not to be served, I feel unworthy to call myself a Christ follower because I don't do that nearly as much as I should. What I mean is, a lot of times the things I do to serve are more self-serving than anything else. As a wife and mother, many times I am guilty of doing things for others that will make my life easier and less stressful because it streamlines activities during certain parts of the day. While I should be encouraging responsibility and partcipation, I am focusing on my mental health by keeping things in the proper flow. Why? So once those things are out of the way, I can get back to my own personal agenda.

In Matthew 14, John the Baptist is beheaded and Jesus finds out. Clearly upset, He got in a boat to retreat to a solitary place, but the crowds would not leave Him alone. And so, considering others above Himself, He healed their sick, when He needed healing. He fed them physical food, when He was desperate for bread from heaven. And when all was said and done, He dismissed His disciples to go on ahead of Him, said good-bye to the crowds, and retreated alone to pray.

His example leaves so much room for improvement in my life. While I am generally not a fearful person, I am fearful in one regard: that if I don't get my quiet time first, before anything else in the day comes, I won't have it before I go to bed. Because as the crowd following Jesus illustrates, something always comes up.

But here's the reality. If I am walking with Jesus throughout my entire day, including Him in everything I do, and consciously listening for His voice above all others, the need to control my designated uninterrupted time becomes less necessary. If I could quit compartmentalizing Him only to my mornings or when something happens, my guess is that I'd end up with way more of Him by the end of the day than I do now. And that's not to say I can't find moments of rest and intentional reconnection later, it just means I don't have to be quite so Type A that I act like God won't meet me where I am to make sure I have what I need.

I imagine that Jesus was completely devastated when He heard the news of His cousin. And I am fairly certain that more than anything He just wanted to be alone. But I also believe God knew that Jesus needed to be reminded of the life John lived, announcing His arrival, and that by serving those that wouldn't leave Him alone, He was honoring John's work. And despite likely being completely physically, mentally, and emotionally exhausted by the day's end, He still had the energy to get alone with His Father to pray. And God not only met Him on that mountainside, I think He gave Jesus more time than He would have had if His first attempt to retreat had been a success.

Jesus, the example You set on living a life of service is one I can only hope to emulate. You gave of Yourself when You had been robbed of much, in the midst of a devastating blow. I pray that You would strengthen us to see the opportunities You have prepared in advacne for us to serve others and to see a connection between what we think we need and how in our service You are providing it. We love you. It's in Your most precious and holy name we pray. Amen. 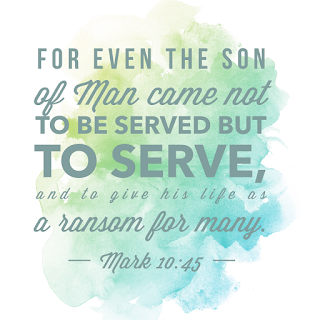