John 1:32-34  And John bore witness saying, "I saw the Spirit descending from Heaven like a dove, and He remained upon Him.  I did not know Him, but He who sent me to baptize with water said to me, 'Upon whom you see the Spirit descending, and remaining on Him, this is He who baptizes with the Holy Spirit.'  And I have seen and testified that this is the Son of God."

John was given an assignment to gou and baptize others with water.  He knew he was doing what he was supposed to do.  At the same tim, he had the ultimate job of multi-tasking.  He had to continue his work while he alos had to keep his eyes and ears open and alert to see the One to come after him.  We aren't told that only John would see this Spirit descend and rest on Jesus, but it seems logical to assume that someone else didn't point it out and ask him what it was, drawing his attention to it.  Was he baptizing when it happened?  Was he on a lunch break?  Was he just heading out for the day or ready to collapse knowing it was over?  Was he praying, waking up from a nap, or exhausted from repeating the same movements and words wondering if he'd missed it?  Regardless of his circumstances, John's willingness to do as he was told and his alert awareness to his surroundings allowed him to witness God move before his eyes.

Father, we get so distracted by shiny objects, mountains that won't move, and opposition we don't think we can defeat.  Help us to trust that if we are doing what You have called us to do, and are seeking You with all of our hearts, that we will find you.  Remind us that Your Spirit lives in us, that through it we have the same power that rose Jesus from the grave, and that we need only to look inward at the changes You have made to know that You are active in our lives.  We don't need to see a dove descending when we can soar on the wings of eagles with you.  Amen. 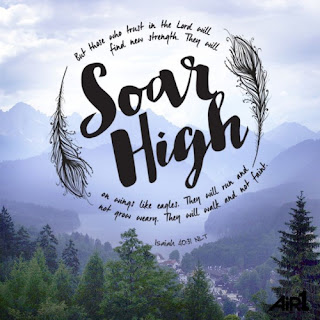