John 2:5-8  His mother said to the servants, "Whatever He says to you, do it."  Now there were set six waterpots of stone, according to the manner of purification of the Jews, containing twenty or thirty gallons apiece.  Jesus said to them, "Fill the waterpots with water."  And they filled them up to the brim.  And He said to them, "Draw some out now, and take it to the master of the feast."  And they took it.

Lord, somehow just in doing something incredibly simple, mundane, and ordinary, You being part of the task or the director of the task turns a common action into a miraculous occurance that can have a monumental effect on everyone present.  Help me comprehend and truly believe that it's not just building arks and leading exiles that makes a huge impact, but being in attendance and doing the simple, yet necessary, that can truly add up to be extraordinary.  The daily compound is more than the once in a lifetime.  Amen. 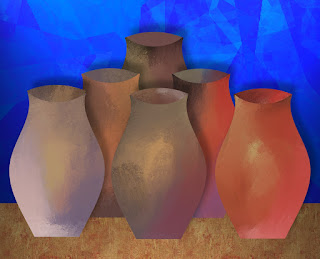