John 5:1-6  After this there was a feast of the Jews, and Jesus went up to Jerusalem.  Now there is in Jerusalem by the Sheep Gate a pool, which is called in Hebrew, Bethesda, having five porches.  In these lay a great multitude of sick people, blind, lame, paralyzed, waiting for the moving of the water.  For an angel went down at a certain time into the pool and stirred up the water; then whoever stepped in first, after the stirring of the water, was made well of whatever disease he had.  Now a certain man was there who had an infirmity thirty-eight years.  When Jesus saw him lying there, and knew that he had already been in that condition a long time, He said to him, "Do you want to be made well?"

Father, You never force Your will or our hand to do anything.  You encourage, equip, convict, point out pros and cons, and knock.  You do everything You can to make us want to, but You never force it.  Why?  Because a desired and sought change lasts while a forced change is resented.  You give us the option, not because we'll do it perfectly if we choose it, but because we'll recognize that You're the one bringing it about.  The part that astounds me though is the question....do you want to be made well.  It seems that the logical answer anyone would have is "yes" but reality says otherwise because change, even for the better is hard, brings out our deepest fears, and ultimately calls us to action.  Father I pray that the greatest changes in me are the ones You bring about in my heart and mind and that I wholeheartedly answer this question with a 'yes'.  I pray that the comfort of 'the known' would not keep me bound in my current state.  And most of all, I pray that the work You do in and through me would shine a light on Your glory and goodness that is undeniable in its scope, power, and influence to a world seeking relief.  Amen

If Jesus were to ask you today, "Do you want to be made well?", what would your response be?

If the answer to that question is 'Yes', what would being made well look like and what are you willing to do to get there? 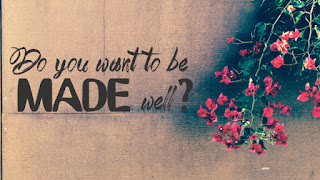